London is by far the UK’s capital of the wealthiest – but how does this compare to the rest of the country?

A feature for the “In Focus” section of Political Insight (December 2012, Volume 3, Issue 3) plots the geography of the wealthiest of the wealthy in the United Kingdom in comparison to poverty.
The map for this feature displays the distribution of the top 1% of the wealthiest 1% according to information published by the agency WealthInsight, one of the companies trying to gather information on this part of the publication that is a prime target for exclusive marketing. Displayed in the map are data on people with assets in excess of US$30 million and where they have their prime address registered in the UK. The extent of the data is very limited because WealthInsight releases data for only 20 UK cities and regions based on postcode areas (Northern Ireland is a single postcode area which is why we did not correlate that data with Belfast’s overall population). Here we have superimposed that data on a population cartogram of the country, drawing circles with an area in proportion to the numbers of super-rich (in red) over people living in each city (in blue). Where they overlap, the circles turn into a purple colour. Where there are more super-rich people than population alone would predict, there is an orange ring around a purple core, as shown around London. Where there are fewer super-rich than the population of a city might predict, there is a blue outer-ring, as around Birmingham. The underlying map shows the distribution of poverty in the UK in five shades of grey.
Cities such as Leeds, Birmingham and Nottingham have fewer super-rich than might be expected – partly because they are not especially affluent urban centres but also, most probably, because their postcode does not include nearby areas such as the North Yorkshire stockbroker belt or the Cotswolds. Aberdeen, in contrast, has some multimillionaires: beneficiaries of the oil boom with an Aberdeen postcode who live some distance from that city. With Manchester it is hard not to speculate that a few extra footballers may have tipped it over the limit. 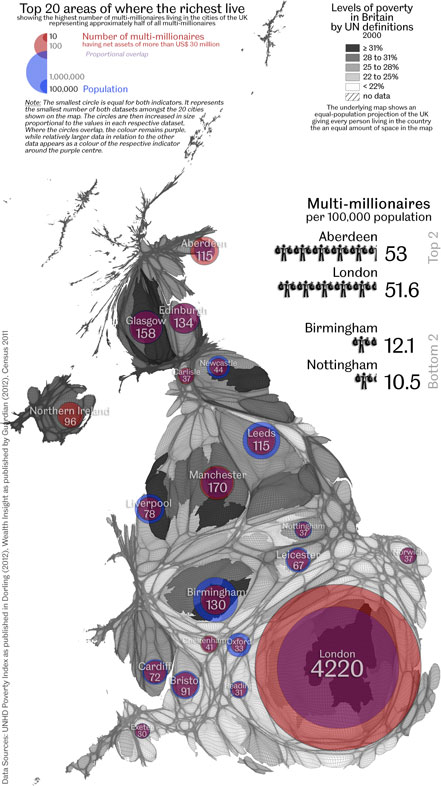