(submitted for publication in Political Insight)

[blockquote5]2012 is not only the year of the London Olympics, but also the time when Londoners decide on whom they want to see leading their city into the four years ahead. The 2008 mayoral election in London was won by the Conservative candidate Boris Johnson who secured 50% of the votes after taking the 2nd preferences into account. But the political message from the last election goes beyond the usual fight between Labour and Conservatives over who has the power in Britain’s capital.
The following map series shows the specific distribution of first preference votes for each of the candidates and their respective political party in the 2008 mayoral election mapped onto an equal population projection where every Londoner is given exactly the same amount of space in the map. Instead of showing the total shares in comparison, the maps take the maximum share of votes into account. The range of votes is shown in five graduated circles based on a natural breaks classification that highlights the variance of the particular support for a party’s candidate across London.
Although the candidates of the smaller parties hardly stood a chance in taking over the job that currently pays an annual salary of £143,911, the electorate that was passionate enough to vote for these candidates is just as concentrated in particular clusters across the city as are those supporters of the two main political camps. The geographical relevance of these patterns is a manifestation of the socioeconomic patchwork of a divided city.
Note: Click the images for a larger view.[/blockquote5] 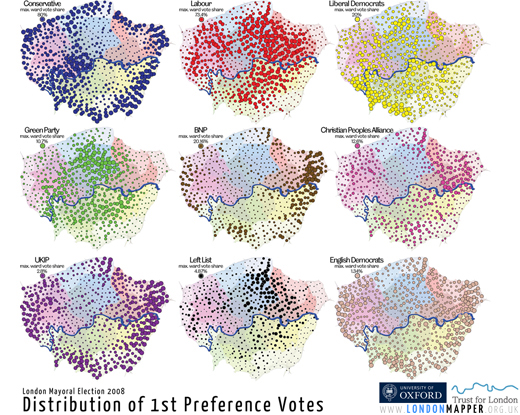