“London is a special city, London is incredibly diverse and London has its own unique health problems. In 2012 the London Deanery, in partnership with the British Medical Association, is hosting a series of seminars that look to provide […] an opportunity to debate some of the key healthcare issues that face the capital in 2012.” This extract from the announcement of the Metropolitan Medicine 2012 seminar series highlights the need to take a closer look at London’s position within the United Kingdom, as the challenges that the city faces are probably not different, but certainly unique to the problems that currently exist in the health sector of the country.
A tale of two cities: London’s health inequalities was the title of a contribution to the seminar series. The presentation highlighted some of the problems that are part of that issue, explaining how social and health inequalities are inevitably intertwined. London is unique in the social landscape, but also part of the processes that shape the UK, which was demonstrated in a series of maps in my slides that accompanied the talk:

While it can help to step back and look at larger areas to see patterns and differences, the unique and diverse nature of London becomes most apparent when zooming into the city. The following map shows one example for the impact that different life chances have on people’s life expectancy, and how London turns into a highly fragmented city: 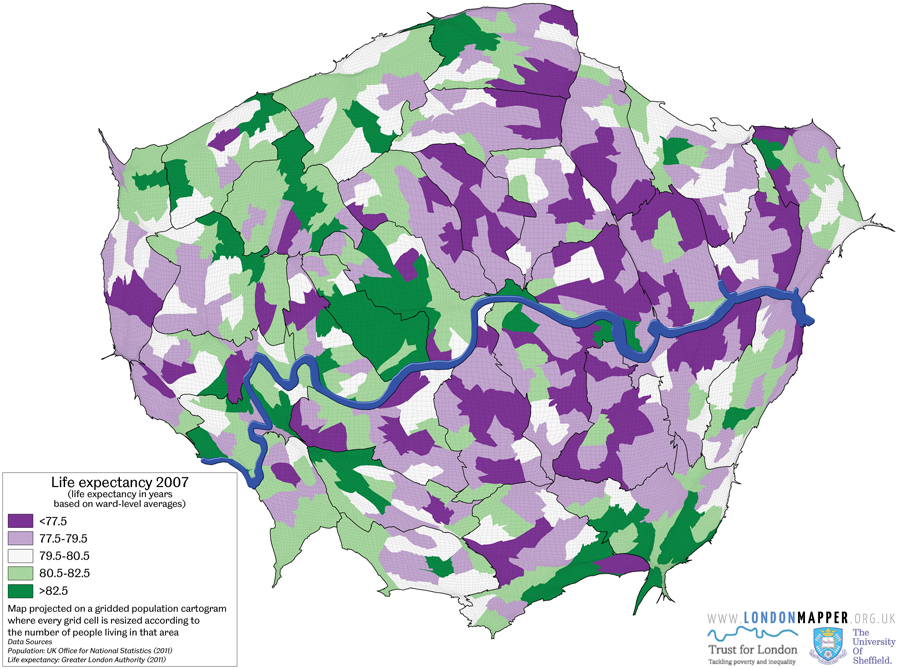 Health inequalities in London have many stories. They are part of living in an unequal country, where the differences within London reflect the differences that occur in the United Kingdom. But they are also part of the unique problems of large urban areas where people come together, but where people also separate each other because they can (or can’t) afford to live different lives. As reflected in the maps shown in my talk, death and its causes can tell us a great deal about these inequalities. We all die at some point in life. But how we die depends a lot on how we were able to live our lives.