How does London connect to the rest of the country?
The British government announced a £9.4bn package of investment in the railways in England and Wales, which – if realised as proposed – adds to the recent efforts to considerably improve the railway infrastructure in the United Kindom. The announcement comes in a year in which another major railway infrastructure project is widely discussed: “High Speed 2 (HS2) is a planned high-speed railway between London and the English Midlands, Northern England, and potentially the central belt of Scotland” (see Wikipedia).
Phase 1 of HS2 has been discussed widely earlier this year, after the latest route plans from London Euston to Birmingham/Lichfield were proposed as part of the HS2 public consultation.
The now available more detailed route proposal shows the geographical location of the line that has some considerable opposition amongst various interest groups. While a high speed rail network requires space for the fastest legs of the journey – usually to be found in the countryside – the shorter parts of the line are not without problems either: As the line connects the most populous areas of the countries, it has to go through some densely populated areas as well, which are less visible on the overview maps of the project (another map is featured on the BBC website). The following map therefore takes advantage of the fisheye perspective of a gridded cartogram that shows the proposed HS2 (phase 1) route plotted on an equal population projection map. The map also includes the average speeds in an area, demonstrating the (obvious) slowdown effect of densely populated areas, mainly London and Birmingham as the main destinations that this line connects in the initial stage. The map also shows how the fastest part of the journey squeezes through the least populated corridor between these areas, and it gives an impression of ‘travel time’, i.e. where one spends much of the time in a high speed train. These are not the landscapes that fly past the window while traveling at highest speed, but the urban landscapes that one creeps along quite slowly when leaving and approaching the major cities: 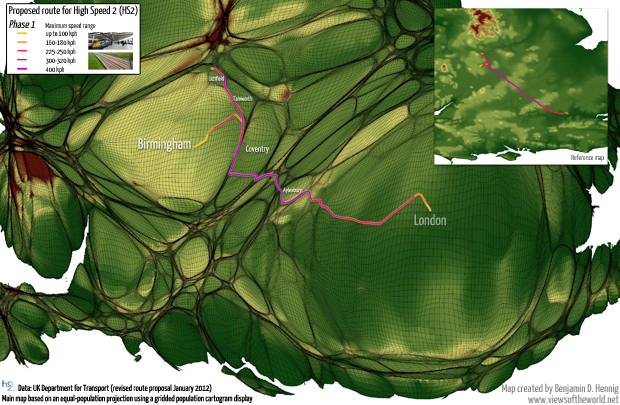