What is it about London? Population growth is slowing across most of Europe – people are having fewer children and, it could be argued, steps are being taken to try to reduce social inequalities. But London is unusual. London continues growing, and London is becoming more youthful. The middle aged and those who are poor, but not desperately poor, are being squeezed out. Graduates from the rest of Britain and the rest of the world flow in ever greater numbers and require ever higher degrees of optimism. Many fail to achieve their aspirations. Above them a few are becoming ever richer. Below them, as private rents and social housing becomes too expensive for huge numbers of lowly paid families and many leave, a new poor may be growing, less well documented, less well protected, with even less to lose.
With a population of currently 8.2 million (according to the 2011 Census), London is not only unique for one of the old world’s megacities by being projected to continue rising significantly in population size over the forthcoming decades, but also by its specific demographic structure. Like many large cities, London has a large share of people in the younger age groups – over 20% in the cohorts from 25-34 – but also a significant share of the youngest with around 7% of its population being 0 to 4 years old. Here is a population pyramid of London compiled from the 2011 Census data that has been released recently: 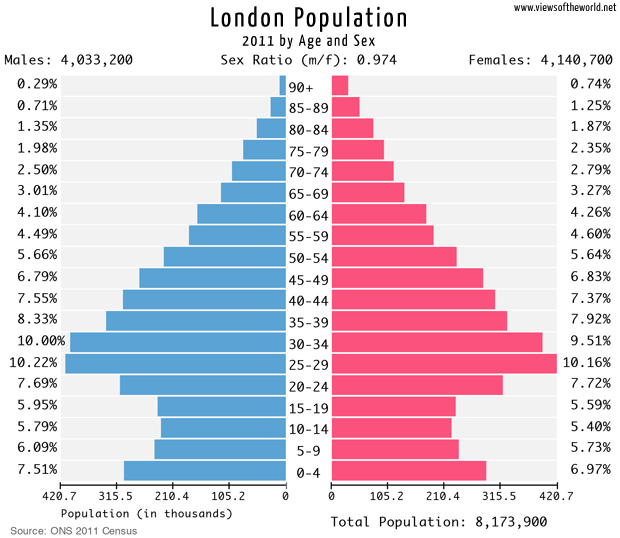 It is not only the demographic structure that is interesting about London, but also its geographic distribution across the city. Taking a closer look at the individual distribution of age cohorts across the boroughs shows, that those seeking for their fortunes in the capital city in their 20s and 30s are concentrated in the inner London boroughs, contributing significantly to the extremely tense situation on the housing market. The following map animation shows the changing shares for each 5-year age group in their geographical distribution based on borough-level data:

These finding are only one part of an analysis of the most recent Census data revealing the emerging poverty and inequality challenges facing London. They were presented at a talk and networking event hosted by the Sheila McKechnie Foundation today. With the key statistics being out for just a few weeks, we were able to analyse the changing levels of poverty and wealth in London using indicators developed for the 2007 study of Poverty, Wealth and Place in Britain. Comparing the 2001 and 2011 Census, it becomes clear that share of people in the ‘Middle’ is in decline on average, while there are rises on both ends of the spectrum, with exclusively wealthy being slightly on the rise, and the share of breadline poor being significantly on the rise, both contributing to London becoming a much more polarised city even before the most recent welfare cuts started having an effect on the population. Some key numbers and a large amount of maps demonstrating these changes as reflected in the Census data can be seen in the slides from the event:

And here is a recording of the main talk with Danny Dorling and Benjamin Hennig of Sheffield University: