Ahead of the eventful year 2012, the world of cartography and maps is paying its own contribution to London with the London Mapping Festival. “The London Mapping Festival 2011–2012 is an 18 month programme of activities designed to promote the unique range of mapping, innovative technologies and applications that exist for the Capital. The festival will showcase all mapping-related disciplines including cartography, surveying, GIS, GPS and remote sensing” (quoted from the LMF website). As part of the cartographic community, the Sasi Research Group of the University of Sheffield is an active supporter of the LMF. Within the work on the Londonmapper project we have contributed one of our maps to the new book London in Maps: a changing perspective. It brings together a wide range of contributions to the LMF’s London Map Exhibition. The book has a wide range of highly detailed maps, charts and cartograms, artist impressions as well as aerial and satellite images ranging from the modern day back to the 17th century. A particular focus is made on maps and images from the last 20 years, giving it a modern cartographic flavour.
The map of the Human Shape of London is a gridded population cartogram giving every person living in the city the same amount of space. Smaller grid cells indicate fewer people living there, while larger grid cells refer to the same amount of space in the real world, but with a much higher number of people living there. And although London is generally characterised by a very high urban population density, the grid pattern shows some significant variation in the crowdedness between the London boroughs, and even within them. The following map is a simplified version of the original map printed in the book with a lower-resolution grid that provides a more generalised overview of the population patterns: 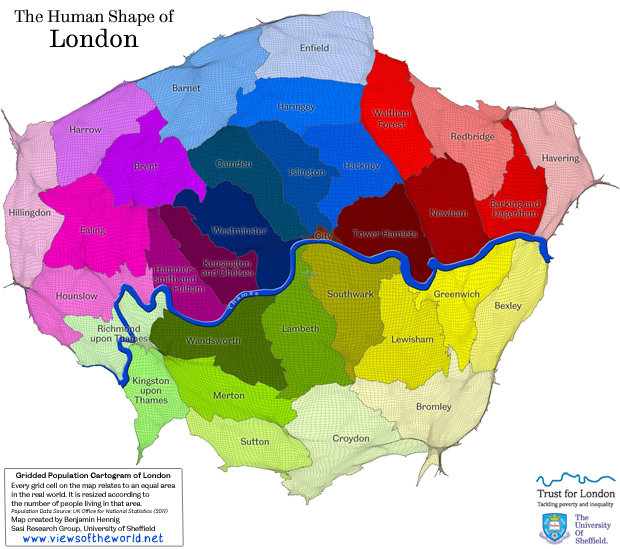 More cartographic impressions from the book can be found in this selection of sample pages (1.8 MB PDF). The book can be ordered vie the London Mapping Festival website: