The old Mayor is the new Mayor of London as Boris Johnson secured a second term in office at this month’s election in the British capital. This left contender Ken Livingstone in second place at a campaign that was put the two personalities more into the spotlight than the underlying politics. Beyond the decision between Boris and Ken the elections provided an insight into how much the political patterns have changed since the last election in 2008. As a comparison to the feature published ahead of the election, this is the same map series but now using the 2012 election results, giving an updated view of the political landscapes of London of all contestants and their respective political parties. This year’s election saw fewer candidates and resulted in a more polarised picture between the two main parties (Conservative and Labour) and the smaller ones. Nevertheless, the individual vote distributions of all participating parties (and candidates) result in specific patterns that correspond to the preferences of the population in London. Majorities of votes from each part of the political spectrum – from right to left wing views – are significantly distributed, not only when it comes to differences between Labour- and Conservative strongholds, but also for the smaller parties, as the following map series demonstrates by mapping the individual vote shares accordingly. The results are displayed on a gridded population cartogram of London (election data provided by London Elects): 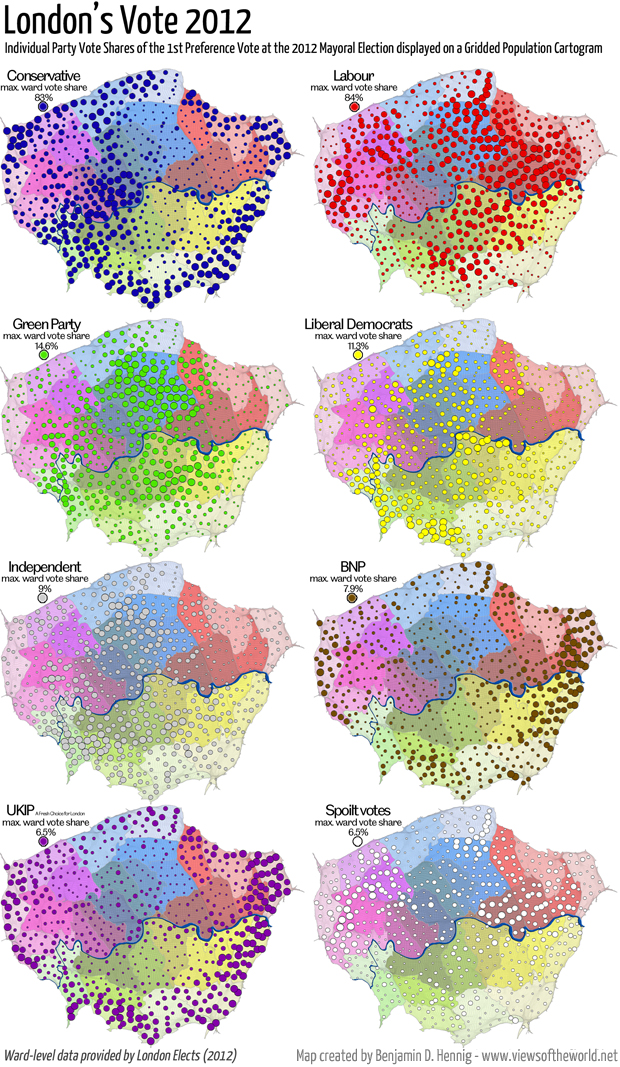 The turnout in the election was very low (38%), meaning that a lot of the success in this election depended on a mobilisation of voters. The Londonist comments: “Do we not care as much about the Mayor and Assembly? Were we all bored of the negative campaigning and that we were faced with Boris, Ken and Brian on the ballot again? Siobhan Benita’s good showing (she polled only around 8,000 fewer votes than Brian Paddick) could be a symptom of alienation from regular politics.“.
Despite two strong personalities and their polarising campaigns, national politics played an important role in the elections. Brian Paddick, candidate of the Liberal Democrats, only came fourth in an election night where his party experienced bad results in the local elections across the country. This put Green candidate Jenny Jones third. Independent candidate Siobhan Benita followed ahead of the considerably weakened right-wing candidates of UKIP (A Fresh Choice for London) and the BNP. The following graphic shows is the distribution of first preference votes in this year’s election (shown in logarithmic scale to highlight the smaller vote shares): 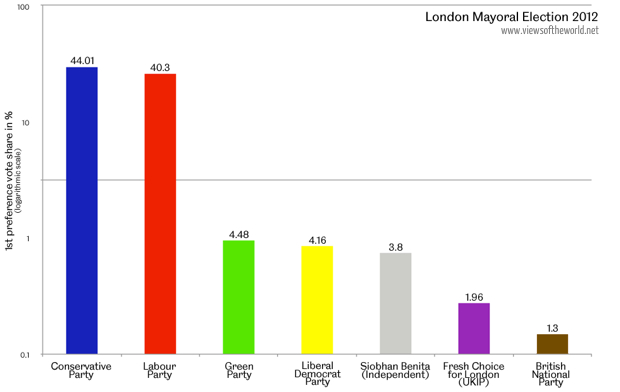 One last group that I included in the above map series is the group of people that spoilt their votes, which beyond the voters who did not turn up to the election is a quite important group reached up to 6.5% of the votes cast in an area. Spoilt votes were counted for such ballots that were unmarked, uncertain or voting for too many. Not always are these made by mistake, but sometimes quite deliberately. The high number in some areas could especially in the first vote have been a statement, much higher than one would probably expect. The map of the distribution of spoilt votes shows that there are indeed some underlying geographic patterns in that group of votes that shows a certain correlation between high numbers of Labour votes and high numbers of spoilt votes. Perhaps this can be seen as one expression of disappointment of Livingstone’s campaign within his party’s strongholds especially in the northern parts of the city, being one explanation while he did not benefit from Labour’s overall success in the local elections.
The political landscapes of London have changed – but not as much as some may have expected after the national shift in politics. The general trends persist as an expression of the persisting fragmented socioeconomic patterns in the city.