[h4]London, the British Isles and the Super-rich[/h4]
by Benjamin Hennig and Danny Dorling

(published in a modified version in Political Insight magazine)

Every springtime the Sunday Times chronicles the lives of the very richest people living in the UK and Ireland and ranks one thousand of them according to an estimate of their wealth. Of those 1,000 wealthiest people just under half live in London, but that half hold a majority of the wealth of the best-off. The London super-rich tend to be a little richer than the rest of the super-rich. The richest ten families in the capital hold a quarter of all the wealth of the London richest families out of those 1000 richest. It is easy to be a member of London’s most elite club, the extremely wealthy, and not feel that well-off when you look at the wealth of those above you.

The debate about the relevance and the impact of the super-rich on society has grown in importance in recent years. Strong evidence is emerging that the gap between the poor and the rich has negative impacts on societies as a whole, as stated most recently in an OECD report on inequality. According to the most recent OECD report, “by hindering human capital accumulation income inequality undermines education opportunities for disadvantaged individuals, lowering social mobility and hampering skills development.” More is in the pipeline and many new findings will be published in 2015 (see footnote 1).

In Spring 2014 the Sunday Times promised its readers that they would “meet the cats that got the cream – the 107 billionaires in Britain and Ireland and the wealthiest from around the world”. Its list considers all people who are mainly based, along with their financial assets, in Britain. This includes overseas-born people but does exclude some wealthy Brits who moved abroad with their assets.

The national level cartogram shown here has the British Isles resized according to the total wealth of the people included in the Rich List by region. Furthermore, the richest 24 individual families in each of the regions are shown on the conventional map, with the circles having an area being proportional to the total estimated wealth of these individuals. Unlike the Sunday Times Rich List, people are only included in one area here rather than in several places. As the very rich usually own many properties it can be hard to locate their main residence.

The top 24 richest families in the country include, the ten most affluent families in London who are also shown with their personal wealth in an extract of the area of London taken out of the wealth-cartogram here. The size of the circles of the 10 wealthiest families representing the their family wealth matches approximately the areas shown in the cartogram visualisation. As a result the image shows, for example, how the wealth of the richest London family is larger than that of all super-rich in the North-East of England combined.

Often when the rich are discussed there is talk of possible envy of them. The widest economic gaps in British society are between those at the very top and those just beneath them within the super-rich group. There is more inequality within the 0.01%, and then within the 1%, than there is within the other 99% of UK society(see footnote 2). If gaps caused envy then it is within the very richest sections of society that most envy would be found. Unfortunately there is no good measure of envy that we can map.

The wealth of the super-rich group has accelerated away from the rest of society in recent years. In spring 2015 the list will be updated again. Why are producing the picture from this year now so that it can be compared with the next one once the new data is released. Some families will drop out, others will move in to replace them and there will be a great deal of shuffling in between. The one thing we can be fairly of is that in the short term, in the next few months, the recorded wealth of the richest families in the UK will have grown again by a huge amount. Most of the circles on the map with have grown larger, and perhaps the concentration of wealth within London will have intensified as well. We will not have to wait very long to find out.

However, at the same time as realizing that London is home to so many of the super-rich of the UK and the world it is also important to understand that of any region of the UK London also has the greatest proportion of families living in poverty. It would be hard to find anywhere on the planet where the absolute gaps in wealth between those who have least and those who have most has become as great as the gaps in London now are, and they are growing wider(see footnote 3). 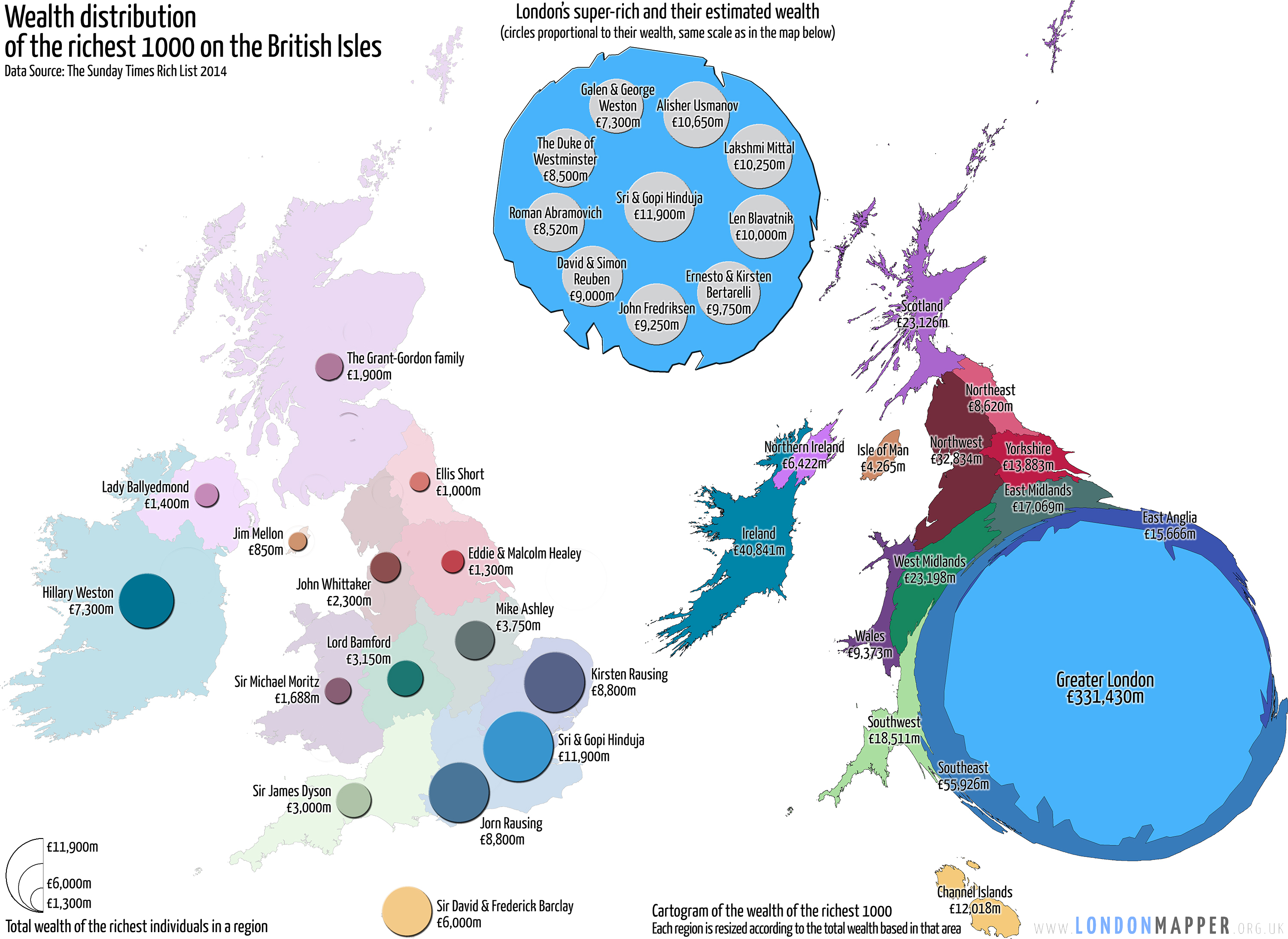 (1) There are numerous report on inequality being harmful, of which the most recent comes from the OECD: http://www.oecd.org/els/soc/Focus-Inequality-and-Growth-2014.pdf
Inequality is also a highly debated issue, as the following statements show:
Pope Francis: http://www.theatlantic.com/business/archive/2014/04/the-pope-tweets-the-internet-freaks/361376/
Christine LaGarde: http://www.motherjones.com/mojo/2014/05/imf-christine-lagarde-income-inequality
Prince Charles: http://www.independent.co.uk/news/uk/home-news/prince-charles-set-to-court-controversy-again-with-comments-on-reforming-capitalism-9434969.html
Mark Carney (governor of the Bank England): http://www.ft.com/cms/s/0/acecac0c-e5ba-11e3-a7f5-00144feabdc0.html#axzz3LcItN4ic