The riots of August 2011 took the nation by surprise. Consternation followed as events appeared to spiral out of control, then condemnation. Later reflection, and the compilation of hundreds of statistics on the rioters who were convicted. Much was also written about those who were not caught but were interviewed, as well as on the severity of the sentences handed down to the minority of rioters who were caught, or identified and convicted. Prison sentences totalling more than 1,800 years were handed down with an average custodial sentence of nearly 17 months (more than four times the average term handed down by magistrates courts for similar offences). 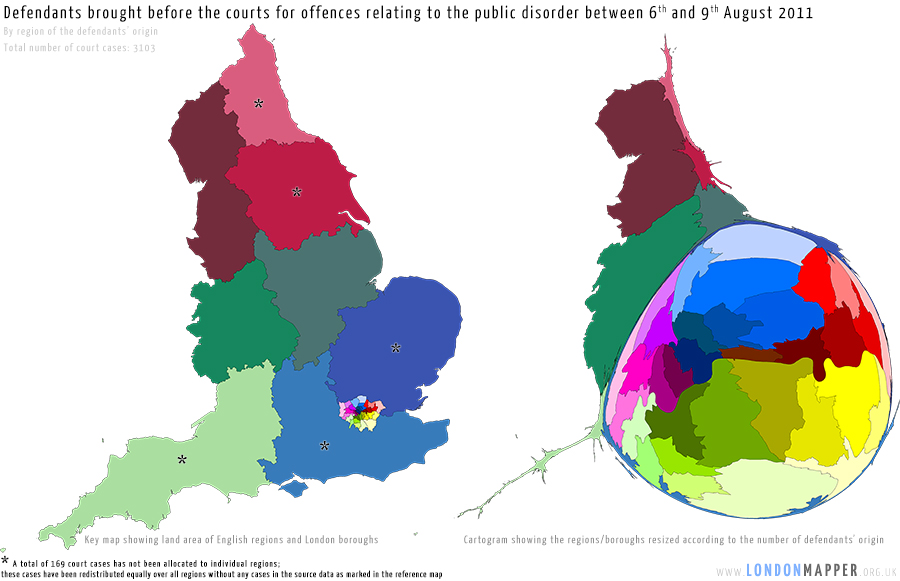 The maps shown here highlight how it was only in England that the riots occurred and only that nation which was immediately immersed in soul-searching. Moreover, in many regions of England there was no rioting at all. Only a few cities in a few areas saw rioting, above all London, as the map of England distinctly illustrates.

Even in the capital the riot-related crimes took place in highly localised geographical areas; in only 1.8% of London’s sub-wards. Of the 3,103 cases brought before the courts in London, as many convicted rioters came from South of the river as North of it. 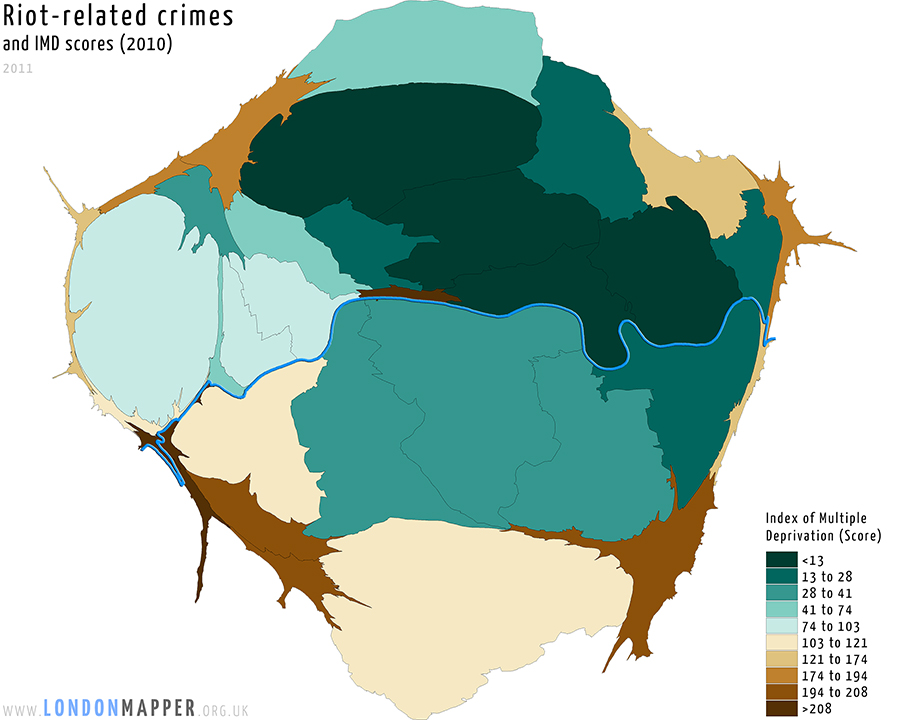 Rioters generally came from poorer parts of the capital but there were notable exceptions, as can been seen from the map of riot-related crimes, overlaid with the Index of Multiple Deprivation – the lower the IMD score the more deprived the area is, coloured dark green; the higher the IMD score the less deprived the area is, coloured dark brown. The map shows that Croydon with fairly average levels of deprivation had the highest level of recorded crimes (430). Ealing – an even less deprived area – had 279 crimes, more than the whole of Greater Manchester (249); whilst one of London’s leafier and most prosperous boroughs, Bromley witnessed 84 crimes – this is significantly higher than the more deprived London boroughs of Camden (59), Islington (58) or Barking & Dagenham (48). 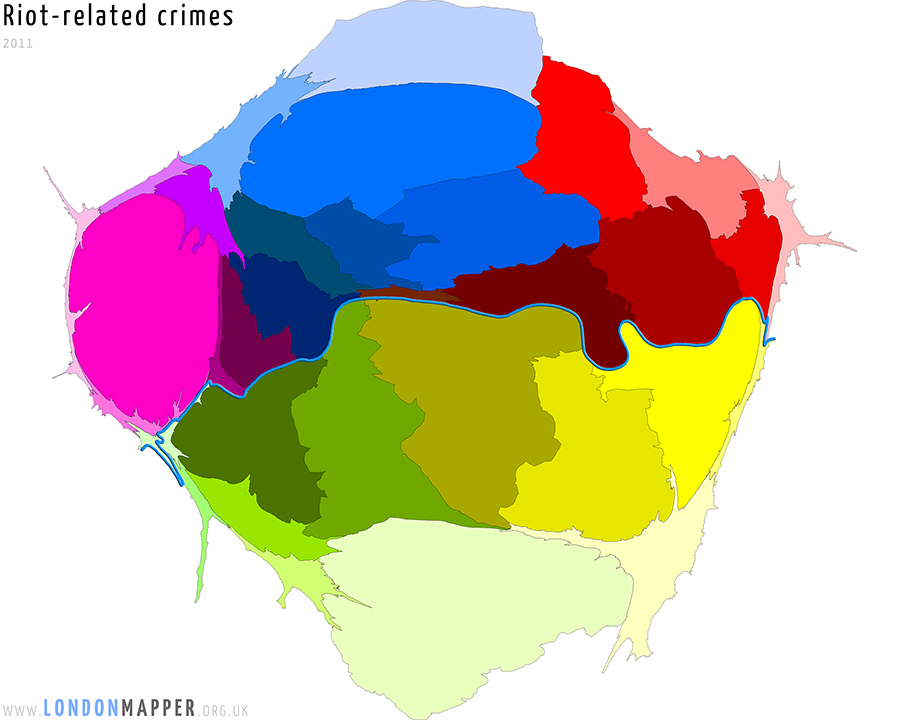 The numbers of people convicted of rioting will reflect police resources, decisions and actions during the days and aftermath of the riots, as much as how many were involved in rioting in any one area or from, any one area. The actions of a few individuals in some northern cities are credited with having prevented riots there.

However, the reasons why other areas experienced riots – especially London – and saw so much rioting may have just as much to do with underlying social trends and a sense of dispossession, as with factors such as police resources. 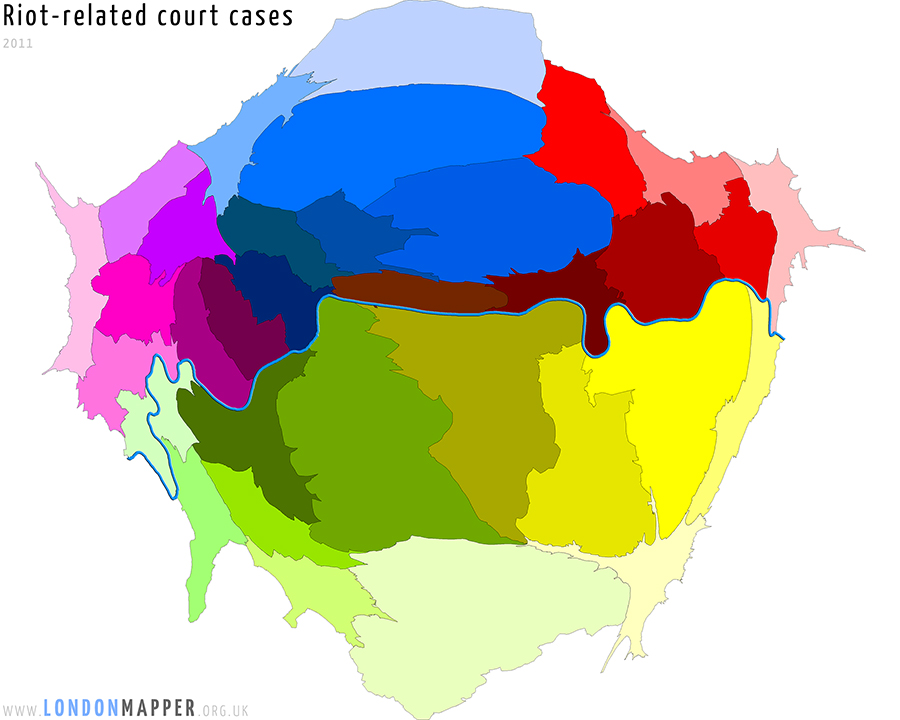 Reactions to riots change over time as more information comes to light and as tempers cool. The sparks that trigger riots are often particular police actions, as was the case in London in 2011 and before, and similarly in many US riots in recent decades. But for the sparks to ignite, an area has to be ready to riot. The conditions have to be right for riot to be likely. The shock of early August 2011 was discovering just how ready London was to riot. It is not surprising that what came as such a shock was not then immediately understood. That is the way of riots. 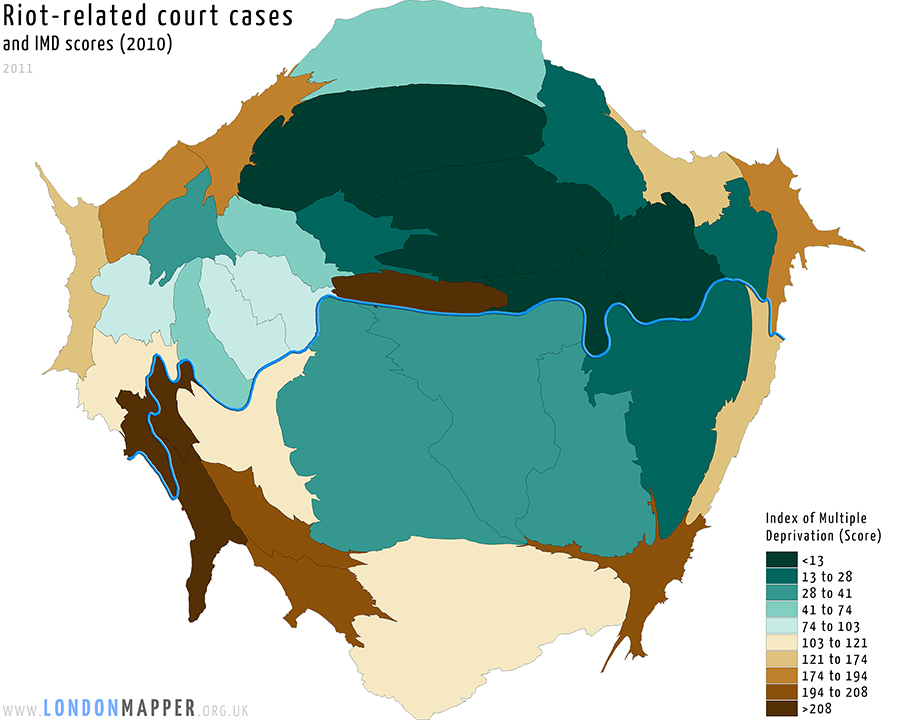 Speaking a year after the Watts riots of 1965 Martin Luther King suggested that:
“The way of riots is not a way of progress, but a blind ally of death and destruction which wrecks its havoc hardest against the rioters themselves” (King, 12 March 1966).

Three years later in 1968, and just before he was assassinated, King told an audience at Grosse Pointe High School:
“It is not enough for me to stand before you tonight and condemn riots. It would be morally irresponsible for me to do that without, at the same time, condemning the contingent, intolerable conditions that exist in our society. These conditions are the things that cause individuals to feel that they have no other alternative than to engage in violent rebellions to get attention. And I must say tonight that a riot is the language of the unheard.” (King, 14 March 1968)

Los Angeles in 1965 was a world away from London in 2011. The poverty and brutality there and then was almost immeasurably greater, and the violence of the ensuing riot was orders of magnitude greater. And yet the trigger, the underlying divisions in each society at each time, and the sense – afterwards – that this was going to happen and would happen again – were comparable. The way of riots is not a way of progress but does make the unheard heard.