In an article for the “In Focus” section of Political Insight (April 2014, Volume 5, Issue 1) Benjamin Hennig and Danny Dorling looked at the overheating of the housing market in London.

The graphics that they created for this feature visualise the considerable changes that took place in recent years using data from an analysis reported in the Guardian: In 2012, the total value of residential property in London was reported to be £1.37 trillion. The value of housing in the capital dominated the UK housing market. By 2013, the value of London housing had risen to £1.47 trillion. Some £100 billion had been added in just one year, an additional £30,000 per property if the rise had been evenly spread out across the capital. However, just as within England, this increase was concentrated within certain areas, particularly those closest to the centre.

When London is redrawn with each borough sized according to the value of residential property, the largest borough becomes Kensington and Chelsea where the average home now costs £1.57 million. Westminster, with more housing but an average value of ‘only’£1.1 million is almost as large. Wandsworth, more typical at £527,000 a home, is more than three times the size of Newham despite having just 30 per cent more homes. However, even in Newham, the ‘cheapest borough’, the average property now sells for over £218,000. 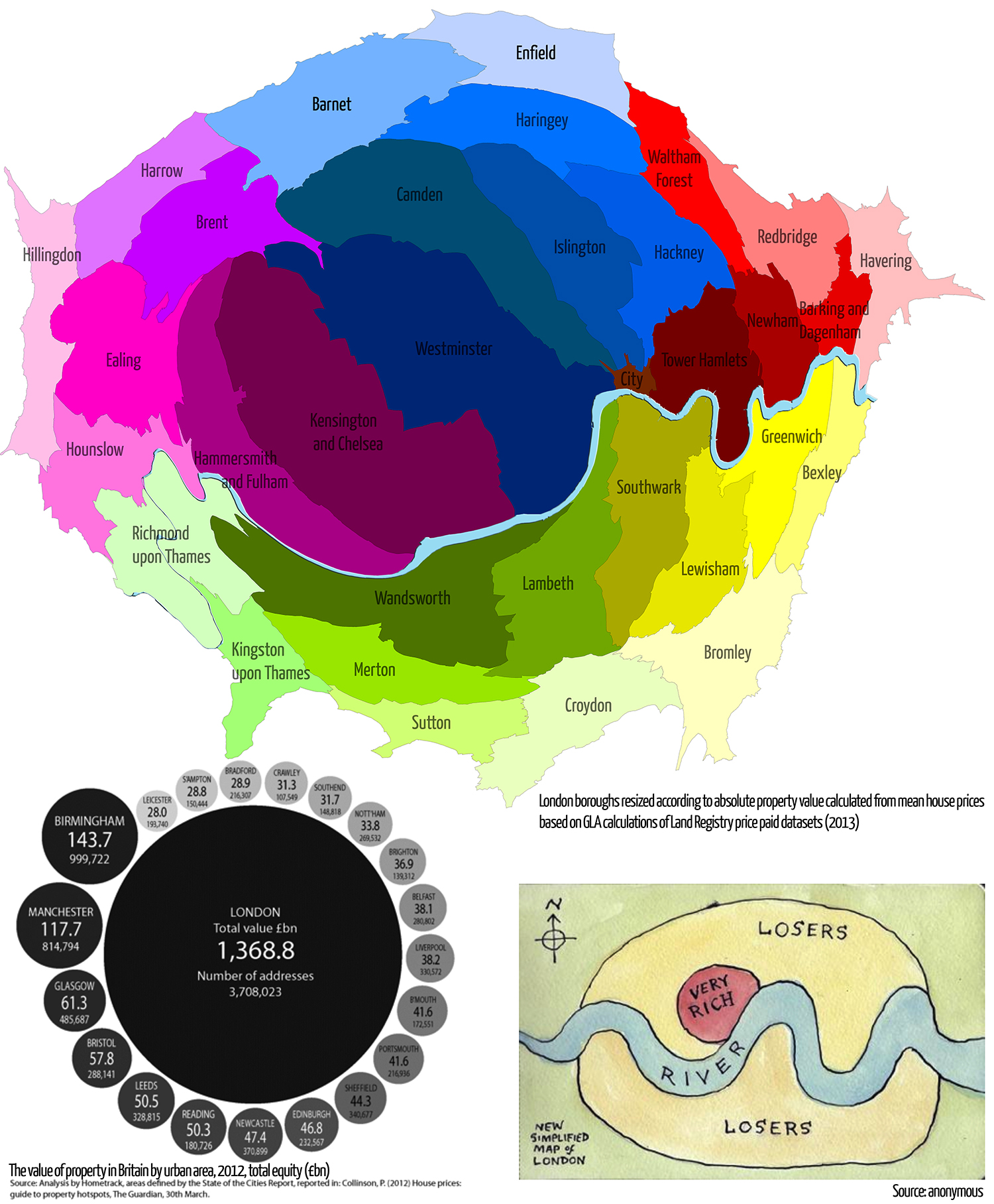 In one year the value of the average home in London rose by much more than the average skilled full-time UK salary. The census revealed that this was not because more people were squeezing into the most expensive areas. The population of Kensington and Chelsea actually fell in the decade to 2011. House prices rise fastest when more people can afford to buy property not as homes to live in but as investments or to rent out to affluent tenants.

The heart of London’s housing bubble can be seen as a circle that stretches from Wandsworth in the south to now encompass Lambeth, Southwark, Tower Hamlets, Hackney, Haringey and Camden. It is most bloated from Westminster through to Hammersmith and Fulham. London, increasingly, is a city in which the rich are completely in control.

A few years ago a cartoon circulated online showing a ‘New Simplified Map of London’ with the ‘very rich’ in the centre surrounded by ‘losers’. Today the drawing shown in the image above looks a lot like the reality of London’s housing market in the housing cartogram.